In our previous post, Making The Most of Your Location: A Guide to Lowering Production Costs, Part I – Creative Location Selection, we described how we halved production costs on a large-scale National Safety Council (NSC) video training shoot by utilizing a hotel and a school rather than a studio or multiple sets,while still capturing everything we needed in a way that was interesting and engaging. When it came to videos that were strictly procedural videos, such as CPR and use of an automatic external defibrillator, we wanted to make sure that these sets were interesting and engaging as well.

We needed to portray various settings that NSC’s clients could relate to. We wanted their clients to see multiple backgrounds, including backgrounds familiar to the airline and construction industries, as well as daycare centers, schools, and warehouses. Although we could find various props to help enliven the various scenes, repeatedly changing the scene takes time and money. That’s when we realized that we could completely change the set with one simple solution.

Whether it is a schoolyard, an airport, a warehouse, or a construction site, we needed to come up with something creative, that wasn’t really seen before in training videos, and that was cost-effective. That’s when we decided to use rear projection to set the scene.

Rear projection isn’t anything new; it has been used in film for years. Actors are placed in front of a semi-transparent screen and behind the screen you project whatever image it is you need to set the scene. This allows the image to shine through the screen, creating a background. You light the actors from the front, and when shooting it looks as if the actors are wherever you want them to be. For instance, when we were shooting the child CPR scenes, we projected an image of a playground, which any teacher could relate to. We projected a shot of a warehouse for adult CPR because many of the people who will watch this training series are warehouse workers. We ended up using over eight different backgrounds for these particular training scenes and all we had to do was change the picture that was being projected. If we had to change the set pieces for each of the different environments, it would have really kicked up production costs. This way, we were able to completely change the look of the set with one click of the mouse.

Feedback on this project has been outstanding. Many people within the NSC complemented us on how the scenarios captured the real-life situations perfectly, and that the various set backgrounds we used in rear projection was something they had never seen before.

The NSC wanted to take their training material and make it exciting and fresh, and with some clever thinking and proper planning, we were proud to be able to help them achieve their goal.

Envision Group Consulting has been privileged to work with the National Safety Council (NSC) on a large-scale training program to develop a wide-ranging series of training videos. These videos covered everything from the proper technique for CPR, to using an automatic external defibrillator, to how to respond to a series of emergencies. We had the challenge of coming up with various case scenarios in which our subjects were in need of emergency care: heart attacks, shock, broken bones, choking, and poisoning, as well as many other situations. We needed to shoot all these scenes in order to capture everything that the NSC wanted addressed, in a way that was interesting and engaging. This was no small feat!

How do you take an extensive training series, with hours of information that needs to be recorded, and make it fresh and compelling to the viewer? You want the videos to portray real-life situations that people can relate to, and you want them to stay focused on what they are watching. You have a certain budget, as well as a set timeline to record all of the necessary scenarios. We were up to the challenge! With some outside-the-box thinking, ingenuity from our video department, and a lot of hard work, we were able to plan a video shoot that would save on production costs and make sure that our final product was engaging and informative.

One key way we saved on production costs was by shooting at one location that could provide multiple sets all in one place. The alternative was shooting in multiple locations, which would have added many hours of setting up and tearing down lights, sound, and everything else that goes into it. Yes, there are studios throughout Chicago that would allow us to do that. But those studios are not cheap and they really only have a few different sets to choose from. Instead of shooting at a studio, we realized that if we rented a business suite at one of the leading hotels in Chicago, we could to shoot everything that we needed to shoot at one location. We had a living room, dining room, bathroom, kitchen, bedroom, and hallway, and we were even able to shoot outside of the hotel. By shooting everything at one location, we cut the setup time in half, getting double the active shooting time in a day. If we hadn’t done that, the price of the shoot would have doubled.

Since a big part of the NSC’s training program is dedicated to pediatric training, it was only common sense to shoot at a school. Again, this provided us a great opportunity to shoot different scenes without changing locations. We could shoot in a cafeteria (allergic reaction), a gymnasium (asthma), a science class (chemical reaction), a playground (broken bone), and a locker room (heat stroke), all without having to pack up all of our gear and move to a new location. Yes, we had to change rooms, but since everything was in the same building, the time it took to move equipment and set up the next shot was minimal.

By shooting at the hotel and the school, we were able to capture everything we needed for the scene-based segments. But what about the videos that were strictly training sessions – the segments that were straight procedural videos, such as CPR and use of an automatic external defibrillator? The NSC wanted to make sure that these sets were interesting and engaging as well. This proved to be a bit more challenging, but we love a challenge, and once again were able to come up with something that was better than shooting on a stationary set.

In Part II, we’ll dive deeper into how we managed to portray multiple locations while shooting in the same room. 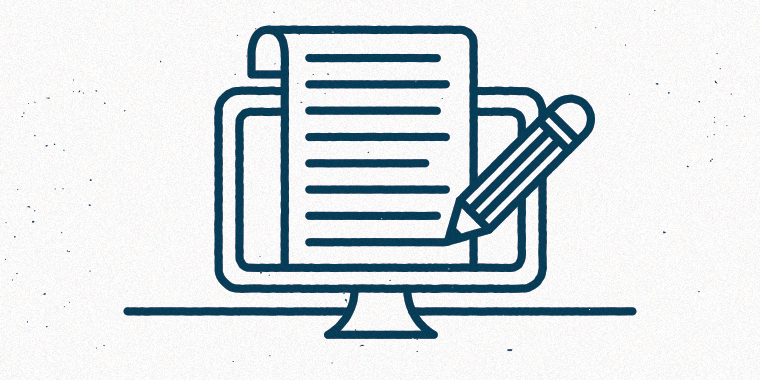 So what are some ways you can make the process of writing an audio narration script a little more streamlined and a lot less time-consuming? Here are more than a dozen tips and pointers I’ve picked up that can help.

Before You Start Writing

Does your project really need audio narration? Sometimes Subject Matter Experts (SMEs) and stakeholders expect us to add audio narration to courses because they see e-learning as a platform for delivering narrated slideshows or animated lectures. But audio narration is so much more effective when it’s used supportively—to explain or describe on-screen visuals—rather than read them, verbatim to learners.

How can you get to the bottom of what kind of audio (if any) your course reallyneeds? Here are some tips and resources that may help:

Once you’ve sorted out your audio needs, identified that audio narration is necessary, and finished storyboarding or prototyping your project, you’ll eventually reach the stage where you can start putting pen to paper (or finger to keyboard, as it were). Now you’re ready to start the process of writing an audio narration script. Here are a few pointers for making this step of the process a piece of cake:

There are so many more great tips for writing awesome audio narration scripts for eLearning if you just click HERE.

We believe that if you give the right people the right knowledge and resources, they can achieve incredible results.